Scale model of Helsinki in 1878 comes alive through augmented reality

The game encourages players to explore stories forgotten in the archives through interesting characters. Players get to move through different parts of the city and familiarise themselves with locations such as the Ullanlinna shipyard, Hotel Seurahuone, the Railway Station and the Turku barracks. The game brings up various phenomena from back in the day, such as the construction of the aqueducts, inoculation, milk yield recording, amusements and multilingualism.

The game is intended for ages 10–12, but it is suitable for all people interested in history. The game can also be played remotely, where the player explores Helsinki on a map instead of the miniature model. The game can be downloaded from the App Store or by scanning the QR code from the game map below.

“Together with Exove, we have created additional content for the scale model, which livens up the exhibition experience and supports learning. The collaboration has been very fruitful: the museum has provided historical knowledge and documents from its collections, while Exove has complemented the concept with its design and game know-how,” says Curator Anna Finnilä from Helsinki City Museum.

“The museum archives yielded plenty of interesting stories and details about the history of mankind and nature, which can be used to enrich exhibitions. The AR experience built around the scale model and the operating principle of the game are scalable, making the game easy to apply to any museum environment, from scale models to entire exhibition facilities,” explains Designer Pekka Antti-Poika from Exove.

The game was tested in two stages by schoolchildren, who provided very honest feedback and insightful ideas for developing the game. The testing situations also showed that the new generation finds gaming an enjoyable way to learn history. “We’re sure there is demand for a solution like this worldwide. We wish to continue developing the game after the project has ended, and maybe some day the game will be seen at the Louvre or the MoMa,” says Antti-Poika enthusiastically.

The Helsinki 1878 game is part of the 6Aika: Smart Learning Environments of the Future project. The project aims to improve the business opportunities of companies that develop services, products and technologies related to learning and smart learning environments, both physical and virtual. A co-creation challenge was held as part of the project, and around ten interested businesses took up the challenge. Exove’s proposal stood out from the offers and entered the implementation stage. 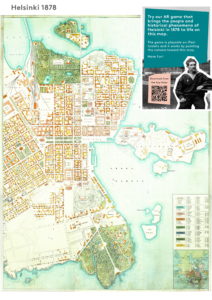 Arrange a joyful party at the Children’s Town!

300 years of the Sederholm family in Helsinki