During the holiday season, you can enjoy the sound installation ‘Summer Amid Winter’ by Mikko H. Haapoja in the Govinius and Falkman Courtyards and at the Katariinankatu entrance of the Helsinki City Museum. The installation is a part of The Routes of Helsinki installation series, started by Haapoja in 2010, which focuses on the changing soundscapes of Helsinki. In the Sederholm Courtyard, you can see the ‘Community’ light installation by Artturi Elovirta, which is a statement on the need for space for alternative culture.

The sound installation Kesä talven keskellä (Summer Amid Winter) by media and sound artist Mikko H. Haapoja is a part of The Routes of Helsinki – Keskusmetsä (Central Forest) installation series, in which Haapoja records the urban nature of the 2020s. The beginning of the decade has been marked by the pandemic and the boom in enjoying local nature. The recordings we can hear now were made in Helsinki by the sea, in the Central Park, at Vuosaarenhuippu and in Pornaistenniemi in early summer 2020. The sounds are enhanced by the lack of aircraft noise at the time. When listening to this installation, we can return to that special summer, but also to the summer Helsinki of decades past. Snow is floating down onto the Christmas trees in the Govinius and Falkman Courtyards, but in the soundscape, the blackbird, the corncrake and the island seagulls are celebrating the rising heat of summer.

In The Routes of Helsinki works, you can hear and experience the ever-changing city as it was at the moment of recording. The decades-long recording work at the various axes of the city constitutes in itself long-term layered art of The Routes of Helsinki. Still, even singular sounds and installations create streams of individual urban memories. The electrically processed Finnish traditional instruments, heard often in the installations, were recorded at the various live performances of the project.

Mikko H. Haapoja (M.Mus.) is a media and sound artist from Helsinki. His works often focus on the borderline between natural and urban soundscapes. In addition to The Routes of Helsinki, he also works on his solo project, Unheard Landscapes. Haapoja’s works have been broadcast by several EBU broadcasters and presented in Oslo and New York, as well as in Helsinki at the City Museum, the Music Centre, the City Hall and open urban spaces, including the metro platforms at the Central Railway Station. 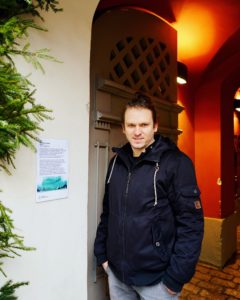 In the Sederholm Courtyard, you can see the Yhteisö (Community) light installation by Artturi Elovirta, which is a statement on alternative culture’s need for space. The installation is based on the transformation of urban trade, digitalisation and changes in the cityscape: how urban space will be used in the future, and who cities are for now that the traditional use of urban space is changing and commerce is becoming increasingly digital.

The creative and insightful use of urban space explores the potential of the locations, builds new identities for them and focuses on development. The installation seeks to evoke discussion on the creative use of public space and about how alternative cultures create new use for spaces and locations, often without a deliberate purpose. The installation aims to present the following questions to its audience: Is the city open or closed? Is the city permissive or prohibitive? Is the city a facilitator or a denier?

Artturi Elovirta, whose last name literally means ‘a lively flow’ in Finnish, lives up to his name as the creative director of Jokojo Oy. He has the skill to combine entities into digital and interactive installations, and his know-how on the development of open and visual urban culture is phenomenal.

Customer Numbers Will Be Limited

The Helsinki City Museum, Children’s Town and the Burgher’s House Museum Invite You to Enjoy the Holiday Season Once Again